The Queen’s Army
by Marissa Meyer 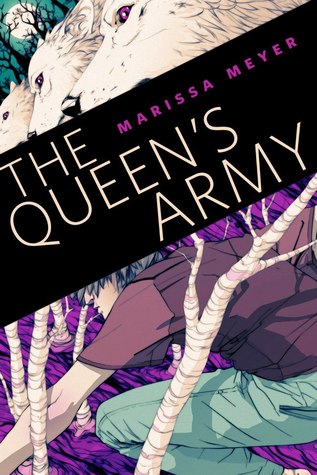 It is time. The boy must leave his family to serve in the Queen’s army. To be chosen is an honor. To decline is impossible. The boy is modified. He is trained for several years, and learns to fight to the death. He proves to the Queen—and to himself—that he is capable of evil. He is just the kind of soldier the Queen wants: the alpha of his pack.

The Queen’s Army is a short story in Marissa Meyer’s Lunar Chronicles that documents the military training of a Ze’ev, a young Lunar boy, who is chosen to be an elite solider in the Lunar Queen’s war against Earth.  He is horrified to learn his duty requires monstrous physical modifications and mental manipulations, but Ze’ev quickly adjusts in order to survive.  The Queen’s Army, which has me wanting to re-read Ender’s Game, provides detailed descriptions of the gory training received by the Lunar Queen’s elite soldiers and further educates readers on the mysterious lunar colony’s animalist culture.

I enjoy this short story because it introduces fans of the series to Wolf, the man who once was Ze’ev and who will appear in Scarlet.  Readers also get a glimpse of life on Luna, the moon colony, which was just hinted at in Cinder.  I wish we could hear more about the regular citizens, such as readers experience with New Beijing, but Meyer restricts the story to the military training facilities and utilizes the setting to emphasize the cruel mentality of Queen Levana.   The Queen’s Army identifies Ze’ev’s moral conflict with his training and the goals of his queen; readers should remember this point when reading Scarlet.

This story really does not really function as a stand alone piece, but I know that it is meant to be read as part of the series.  Actually, The Queen’s Army is a must read for those continuing with Meyer’s series as it is necessary aspect of Wolf’s character development.  Wolf is one of my favorite characters in the series so far, and The Queen’s Army made me more sympathetic to Wolf’s struggles in Scarlet.  I immediately started reading the next book in the series so expect to hear about it in the next few days.  Let me know what you thought about The Queen’s Army!

5 thoughts on “The Queen’s Army”