The Blue Girl
by Alex Grecian 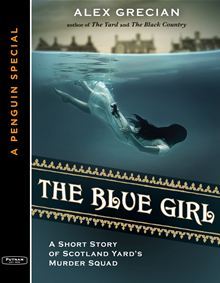 From the author of the nationally bestselling suspense novel The Yard and its sequel The Black Country, both novels of Scotland Yard’s Murder Squad, coves a short story of the Squad, a cautionary tale: Be careful what you wish for.

October 1889: Constable Colin Pringle is a man of few illusions, but there is something about the girl in the canal, her skin a delicate shade of blue, that bothers him more than he expected it would. Perhaps it’s because Dr. Kingsley’s forensic examination suggests that she was a just-married bride. Someone needs to find out just who she was and what happened to her, Pringle decides, and he sets out to do exactly that. But the answers will not be anything like what he expects. In fact, they will shake his view of the world to the core.

The Blue Girl is officially listed as #2.5 in Grecian’s Murder Squad series, but I decided to review it first because the story takes place before the opening novel in the series, The Yard. But, I suggest reading The Yard, which I will review tomorrow, before The Blue Girl. The Yard provides the detailed character development and established relationships that readers should know before jumping in to the short story. Also, Grecian should commend his cover artist because the covers for each book are amazing! This is my favorite; it is morbidly beautiful and it gives me chills each time I see it.

On to the review! The Blue Girl is told as an entry in Constable Colin Pringle’s personal journal. It is written from his POV and follows his investigation for the killer of the blue bride. The story needed to be longer. Grecian did not have the space to tell the story and include his usual flare and descriptive language. The Blue Girl starts out in Grecian’s normal style as he shows us selflessness of destitute Londoners retrieving the girl’s body, but such descriptive language diminishes as the story progresses. I know that Colin Pringle is a vain, but good man from The Yard; he comes across as stuck up and almost whiny in this short story. I also didn’t feel like Pringle’s view of the world was rocked to the core upon discovering the truth behind the blue girl’s death. I could tell that he was disturbed by the outcome of the investigation but nothing more. The latter half of the story was missing the vibrant ‘showing’ language that makes Grecian’s novels so enjoyable. Hopefully his next short story will be longer.

Grecian’s secondary female characters are rather flat, both in The Yard and The Blue Girl. I expect this to change as he continues writing and building his experience. I’ll discuss Grecian’s writing style further in my review of The Yard.

Overall it is a good short story and I definitely did not expect the ending! I love Grecian’s characters and I really enjoy the time period of the Murder Squad novels. I recommend The Blue Girl as a fun read but I suggest you start with The Yard to get a better feel for the characters and Grecian’s writing style. Has anyone else read The Blue Girl?