Not a Girl Detective 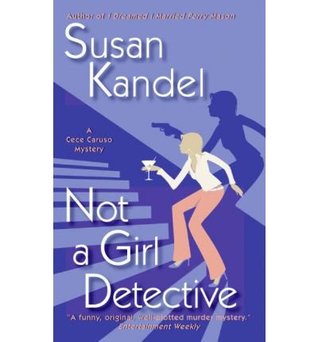 Besides her beloved collection of vintage designer clothing, there is nothing Cece Caruso cherishes more than her childhood memories of Nancy Drew. Her near obsession with the fictional teenage sleuth led her to become a professional biographer of classic mystery writers. And now that she’s working on a book about Nancy’s pseudonymous creator, “Carolyn Keene, ” Cece’s in heaven.

At the L. A. home of another rabid Drew-ophile, Cece finds a treasure trove of useful memorabilia, including one unique and somewhat shocking collectible. Later she finds a dead body — and a puzzle that would sorely test the skills of her spunky girlhood heroine. Now she’ll have to channel her former idol and unmask a murderer, and the killer may be coming for Cece next.

I had a difficult time initially classifying this novel; was it a mystery or a cozy-mystery?  Here is how I differentiate between the two: cozy-mysteries are short, light-hearted mysteries that can usually be finished in one sitting, always have a happy ending, and provide a series of novels following the adventures of a plucky amateur sleuth main character.  All mystery novels that don’t really adhere to these sub-genre traits are bunched under the basic tag ‘Mystery.’  Not a Girl Detective is definitely a cozy-mystery but the amount of historical information concerning the women of Nancy Drew had me hesitant to classify it as such.  Now on to the review…

Are you a fan of plucky amateur sleuths?  Would you like to learn a little about Nancy Drew and the women who developed her?  Are you in need of a good mystery for a late summer trip to the beach?  Then pick up Not a Girl Detective by Susan Kandel!

I found my copy of Not a Girl Detective in a .99 cent bin.  I was a poor college student in search of a book that wouldn’t destroy the bank account and I wasn’t expecting much from the novel.  I was surprised because the Nancy Drew theme is intriguing and the mystery is fun.  I enjoyed reading about Cece, the main character, and her antics as she searches for the missing collectable, but my favorite aspect of the book was everything associated with Nancy Drew.  Kandel included details on the women who wrote the stories under the Carolyn Keene pseudonym, the Stratenmeyer publishing syndicate, and Grace Horton, the model who provided the face of the girl sleuth.  Not a Girl Detective offered a unique mystery, not something I normally find in a cozy-mystery novel.

The novel did suffer from similar issues found in the sub-genre.  I would have liked a little more plot depth when it came to the Nancy Drew material and mystery.  I also wished there was more character development for the best friends, villains, and the boyfriend.  Maybe I would feel differently if I had actually read the first book in the series; Not a Girl Detective is the second book of Kandel’s Cece Caruso series.

So I suggest definitely picking this up for a fun read.  Nothing more.  Has anyone else read Not a Girl Detective or any of the Cece Caruso mysteries?