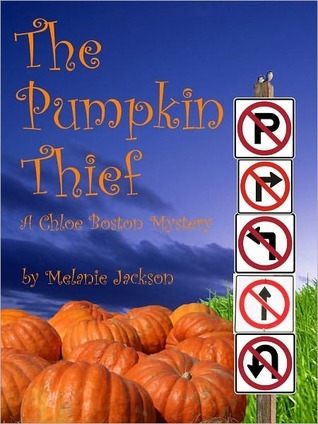 Chloe Boston, meter maid and unofficial sleuth of the Hope Falls Police Department, is on the trail of the Halloween Killer and a second troublesome criminal, the Pumpkin Thief, who has robbed every pumpkin patch in town. Aided by her dog and new boyfriend, Chloe is closing in on Hope Falls public enemies 1 and 2.

A few years back I stumbled upon the Chloe Boston series, which is a seasonal mystery series that  features Chloe Boston, a short meter maid with a natural talent for deductive reasoning.  I have only read the Halloween themed novels in the series and had no problems reading the novels out of order (something that is VERY rare for me).  The books are fun, light, and would be a nice cozy-mystery series to read through out the year.  They are short (I read three over the weekend) and perfect for a warm fall afternoon on the beach!

So for the first book The Pumpkin Thief, which is actually the second book in the series, Chloe Boston is spending Halloween working as the meter maid for Hope Falls.  She has dreams of becoming an official detective for the police department but is having trouble passing the physical aspects of the entrance exam due to her shortness.  Chloe’s Halloween plans are to enjoy the holiday with friend and her dog, Blue, but she is charged by the chief to solve two mysteries.  She must find who murdered an out of town visitor while also uncover who is stealing all the local pumpkins.  Halloween is more exciting than Chloe expected.

It is a little hard to initially get in to The Pumpkin Thief.  The writing is rather plain and listy, but stick with it because it eventually smooths out and gets easier to follow as the book progresses.  Chloe is very opinionated and can come across judgmental at times.  I enjoy her because she has a very literal view of the world and refuses to put up with petty behaviors, but I feel her judgmental nature may irk some readers.  She is likable and relatable for me, as are the rest of the characters.

It is a cozy-mystery so expect to know killer’s identity before you are half way done with the book.  I suggest you ignore this point and take the time to enjoy the story and Chloe’s Halloween adventures.  One of the great things about cozy-mysteries is their predictability and short style.  Reading The Pumpkin Thief always puts me in the Halloween spirit and leaves me craving pumpkin spice cake!

Sidenote:  I will review two other books in the Chloe Boston series this week.  Chloe is why I keep returning to these stories year after year.  She is real to me; many of her personality traits mirror my own.  Plan to read more about that in the coming reviews!  But for now, The Pumpkin Thief is the perfect Halloween cozy-mystery!