In The Dead of Winter 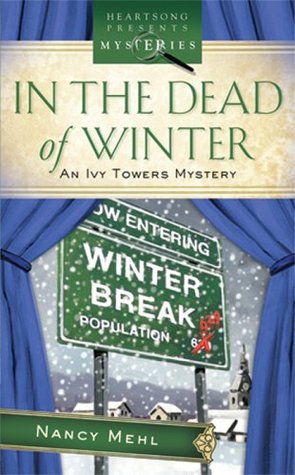 Samantha “Ivy” Towers returns to Winter Break, Kansas, where she spent her summers as a child, to make funeral arrangements for her Aunt Bitty. While there, she begins to suspect her aunt’s death, which resulted from a fall in her bookshop, wasn’t an accident after all. Childhood friend Amos Parker, now sheriff of Winter Break, seems anxious to get Ivy out of town. A missing book, a message scrawled by an unknown person, and an extra coffee cup leave Ivy with more questions than answers.

Monthly themed reading means that I scour the holiday mystery nook book selection each week.  In The Dead of Winter is one such find.  Ivy Towers is forced to travel to Winter Break, the small town where she spent part of her childhood, to bury her beloved great-aunt.  Aunt Bitty fell from her rolling ladder and now Ivy is the soul proprietor of her aunt’s bookstore.  Ivy is convinced that Bitty’s death is more than just an accident.  She is determined to find the truth and get back to her own life far away from the small town.  But, life has a funny way of changing when you least expect it.

In The Dead of Winter reminded me of the Hallmark holiday movies I have binged watched the last week.  It provides a clear moral message mixed with an interesting mystery.  And the main setting is one of my dream locations; an antique house that has been converted in to a bookstore with an attached apartment.  I want to live there!  Back to the message:  Mehl wants her readers to remember that love and forgiveness is the way to lead a full life.  These characters must learn to embrace all aspects of themselves, including the aspects they would rather forget, and constantly strive to be the best person possible.  It was a nice reminder of the selflessness we should all strive for in the craziness that permeates the holiday season.

The story occurs in the weeks leading up to Christmas but barely touches on the actual holiday.  This was surprising because In The Dead of Winter is a Christian book.  Mehl specializes in novels that feature intrigue and murder with a touch of faith.  So I was shocked that Christmas did not come up.  Instead the focus of the message was forgiveness.  Mehl does a descent job of mixing the Christian message with the murder mystery but it is not seamless and can read a tad forced at times.  Don’t discount it though because it is a good point and an enjoyable mystery.

Plus, Ivy is just fun to read.  She reminds me of myself and I actually cried I laughed so hard at her mad flight through the funeral home.  Some moments were a tad cliché, remember Hallmark movie, but none turned me away from the story.  The one thing that bugged me were the names.  I know that Mehl immerses her readers in the small town culture but Amos is not the name of a modern love interest in his early thirties.  No.  I absolutely loved the character but I kept calling him A in my head because Amos just made me cringe.  Oh well.

In The Dead of Winter was an uplifting read that is perfect for curling up on a puffy couch with a glass of hot chocolate.  Have you read any of Mehl’s novels?