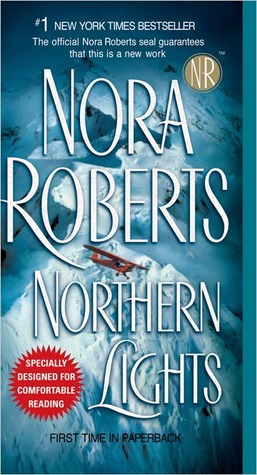 The town of Lunacy, Alaska, was Nate Burke’s last chance. As a Baltimore cop, he’d watched his partner die on the street – and the guilt still haunts him. With nowhere else to go, he accepts the job as chief of police in this tiny, remote Alaskan town. Aside from sorting out a run-in between a couple of motor vehicles and a moose, he finds his first few weeks on the job are relatively quiet. But just as he wonders whether this has been all a big mistake, an unexpected kiss on New Year’s Eve under the brilliant Northern Lights of the Alaskan sky lifts his spirits and convinces him to stay just a little longer.

Meg Galloway, born and raised in Lunacy, is used to being alone. She was a young girl when her father disappeared, and she has learned to be independent, flying her small plane, living on the outskirts of town with just her huskies for company. After her New Year’s kiss with the chief of police, she allows herself to give in to passion – while remaining determined to keep things as simple as possible. But there’s something about Nate’s sad eyes that gets under her skin and warms her frozen heart.

And now, things in Lunacy are heating up. Years ago, on one of the majestic mountains shadowing the town, a crime occurred that is unsolved to this day – and Nate suspects that a killer still walks the snowy streets. His investigation will unearth the secrets and suspicions that lurk beneath the placid surface, as well as bring out the big-city survival instincts that made him a cop in the first place. And his discovery will threaten the new life – and the new love – that he has finally found for himself.

I’m not going to provide a summary of Northern Lights because the synopsis does a pretty good job.  I am going to say that I enjoy Northern Lights.  I love the town of Lunacy, Alaska; I like how the citizens of the town feel like one big family.  And, I love Nate Burke!  I am a sucker for a descently written cop character, and Nate Burke definitely fits the mold.  He is kind, caring, tortured, dedicated, and good at what he does.  The job is a part of him and he just can’t abandon it; even when he runs from his past in Boston.  Nate Burke is the reason I have read Northern Lights multiple times.

But a good story needs more than just a stellar leading man.  Lunacy has it all with a loveable cast of characters and a compelling mystery.  Roberts provides a varied group of supporting individuals who are all well-rounded.  Each has their flaws as well as their redeeming qualities, and my favorites are Hop and the Professor.  Roberts is a master of writing an intriguing mystery that keeps you guessing but doesn’t give you indigestion by force feeding you unnecessary suspense.

I did have a hard time liking Meg Galloway, which is not good for the main love interest.  I couldn’t stand her my first read but I found my opinion changed some the second time around.  Roberts intended her to be a strong, independent, and somewhat cold woman.  I can’t help but see her as a spoiled brat; high maintenance but not as whiny as her mother, Charlene.  It probably didn’t help that I listened to the audiobook and a man provided the voices.  All his female characters sounded a tad whiny.  I will say that this time I did enjoy the competent and strong pilot side of Meg.  I had more respect for her this time, but I still couldn’t get behind her romance with Nate.

Roberts had me enthralled with Lunacy just with her basic survival descriptions.  I never thought of erecting a guide rope to keep people from straying away from the buildings in a blizzard.  And, Roberts does an amazing job accurately depicting the attitudes of the pilots.  That’s another reason I just keep coming back to this book!

I like Northern Lights and the fun, light reads that Nora Roberts produces.  There is a TV movie but I couldn’t force myself to watch it.  There is no way that Leann Rimes could pull off the competent pilot aspect of Meg Galloway.  Just, no.  I do recommend the book though, so let me know what you think!