Murder on the Yukon Quest 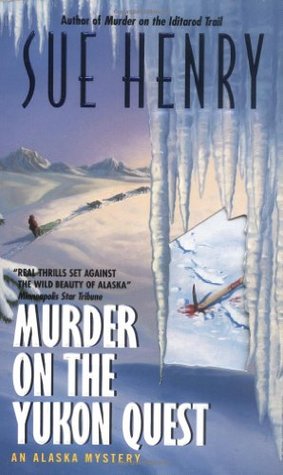 Jessie and her team of dogs are competing in the toughest dog sled race in the world–with an unknown killer on their trail. The beautiful Alaskan wilderness is the setting for this novel, by the author of Murder on the Iditarod Trail.

I discovered Sue Henry five years ago while wondering through the local library on a dreary January afternoon.  I had just moved to Florida and, for some reason, my heart longed to read an Alaskan mystery.  Sue Henry delivered and I ended up reading all her books in the library that rainy month.

Murder on the Yukon Quest is the 5th book in the Alex & Jessie series but the first one I read.  Jessie Arnold has decided to run her team on the Yukon Quest, a 1,000 mile race from Whitehorse, Yukon to Fairbanks, Alaska.  She is a rookie on this trail, but an experienced musher due to running the Iditarod for years.  Jessie is excited about running this race but gets more than she bargained for when she is involved in the search for a kidnapped musher.

Henry provides beautifully detailed passages on the Canadian and Alaskan terrains and the history of the race.  She also documents the art of dogsled racing, which includes running schedules, feeding regimes, and the care of sled dogs.  I love these details because they make me feel like I am there with Jessie on her run, but these passages can be tedious for some readers.  I also enjoy reading about how the mushers work together despite competing against each other.  All racers were there to help anyone in trouble and their community is similar to the aviation community that I belong to, so I felt even more connected to the mushers.  Now add murder and kidnapping to this harsh environment and Henry has me hooked!

I do wish that Henry had tied in all the details concerning the kidnapping.  Don’t get me wrong, you will find out who did it and why, but I was left with a number of questions.  How did the bad guys become involved in this plot?  How was their plot meant to change the races?  Why choose Debbie Todd?  Small questions that keep me pondering even after the last page is turned.

I don’t recommend reading Murder on the Yukon Quest first.  It was the first Alex & Jessie novel I read and is definitely still my favorite, but this is the sixth book in a series of 12-13.  A turning point in Alex and Jessie’s relationship occurs in this novel and the relationship deserves the back story of the first five books.  I initially missed out on this and it has made it rather difficult for me to embrace Alex as Jessie’s love interest when reading the other books.  I can’t help but prefer Lynn Elhers after reading Murder on the Yukon Quest.  So start with the first book, Murder on the Iditarod Trail.

Have you read any Sue Henry novels?  Who else is planning on tracking the 2015 Yukon Quest and Iditarod Races!?

One thought on “Murder on the Yukon Quest”