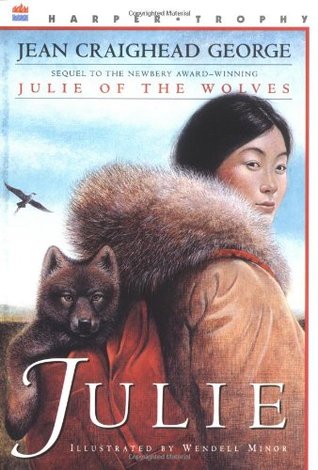 Julie’s decision to return home to her people is not an easy one. But after many months in the wilderness, living in harmony with the wolves that saved her life, she knows the time has come.

Julie is not prepared, however, for all the changes that she finds. Her father has forsaken many of the old Eskimo traditions. He has given up his sled dogs for a snowmobile, and now looks after the musk oxen that serve as the village’s income. He will do anything to protect them — even shoot any wolves that might threaten the herd. Julie knows that, like her father, she must find a way to reconcile the old ways with the new. But how can she do that without putting her beloved wolves in danger?

Note: There will be spoilers for those who have yet to read the first book in the series, Julie of the Wolves.  Please read it first and check out my review here!

Julie was published twenty years after Julie of the Wolves.  I was lucky enough to read them back to back as a kid, and I suggest new readers of the series do the same.  Julie starts where Julie of the Wolves ends and brings extra closure to Julie’s story.  Julie of the Wolves emphasizes the changing cultures of Alaska, from the native to that of the white man.  In the end, Julie makes the heartbreaking decision to stay with her father, who has become a gussak (white man) in her eyes, and abandons the life of the wolf and the Eskimo.

Julie outlines Julie’s adjustment to her knew life.  At first she is tormented by her father hunting via airplane and that her new step-mother is from Minnesota.  She has a difficult time accepting the CB radios, electric stove, and muskox industry that keeps the town alive.  Julie is stuck in a world that she does not wish to understand.  It takes birthing a muskox calf with Ellen, her step-mother, in the middle of a blizzard to teach Julie that both cultures can work together and adapt into something new.  This is the lesson of Julie, and it is one that her entire family must learn, including her wolves.

The second installment does not invoke the same raw emotional response as Julie of the Wolves but I feel it is a necessary read when teaching of the impact of cultural and environmental changes brought on by  ‘progress.’  It teaches young readers to be open, in both mind and heart, when encountering such differences.  Julie is a story of love; love between a father and child, step-mother and child, and Julie and her wolves.  It is a perfect ending, and new beginning, to Julie’s story.

There are three novels in the Julie of the Wolves series, but the third one focuses on the wolf pack and Kapu, Julie’s wolfbrother’s, journey as a leader.  Take the time to read them all!  What books influenced your childhood?