The Stench of Honolulu: A Tropical Adventure 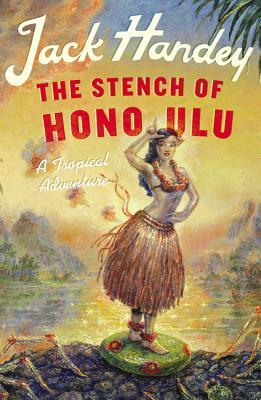 THE STENCH OF HONOLOLU

Are you a fan of books in which famous tourist destinations are repurposed as unlivable hellholes for no particular reason? Read on!

Jack Handey’s exotic tale is full of laugh-out-loud twists and unforgettable characters whose names escape me right now. A reliably unreliable narrator and his friend, who is some other guy, need to get out of town. They have a taste for adventure, so they pay a visit to a relic of bygone days-a travel agent-and discover an old treasure map. She might have been a witch, by the way. Our heroes soon embark on a quest for the Golden Monkey, which takes them into the mysterious and stinky foreign land of Honolulu. There, they meet untold dangers, confront strange natives, kill and eat Turtle People, kill some other things and people, eat another thing, and discover the ruins of ancient civilizations.

As our narrator says, “The ruins were impressive. But like so many civilizations, they forgot the rule that might have saved them: Don’t let vines grow all over you.”

Disclaimer: I did not finish The Stench of Honolulu. I managed to get through a third before putting it down, so this will be a short review.

I am far too literal for the humor in The Stench of Honolulu. I just didn’t find it funny. Some reviewers describe breathlessly laughing throughout; I chuckled once.  The majority of the jokes fell flat.  The main character was an idiot with no redeeming qualities.  I initially thought The Stench of Honolulu was Handey’s attempt at satire, but no.  Instead it is just pages and pages of ‘opposite day’ type observations, a dragging plot, and unrealistic commentary.  Seriously, who doesn’t know what a cow is?!

Now I did chuckle that one time because the explanation of the formation of Hawaii was pretty darn funny. I also like Handey’s minimalist journal-style writing technique; it was rather well done and a nice change from most modern fiction.  I also felt that he had a decent plot following the two main characters’ journey through the jungles of Hawaii in search of the golden monkey.  Unfortunately, I couldn’t force myself to stick around long enough to reach the end.

4 thoughts on “The Stench of Honolulu”