The Night is Alive 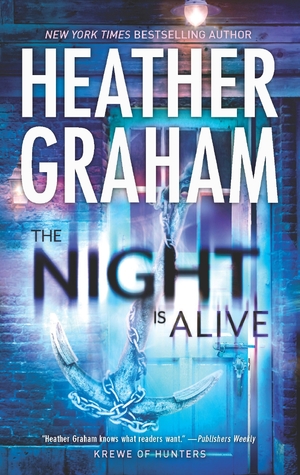 It’s a city of beauty, history, hauntings. And one of the most haunted places in Savannah is a tavern called The Dragonslayer, built in the 1750s. The current owner, Gus Anderson, is a descendant of the original innkeeper and his pirate brother, Blue.

Gus summons his granddaughter, Abigail, home from Virginia, where she’s studying at the FBI Academy. When she arrives, she’s devastated to find him dead. Murdered. But Abby soon learns that Gus isn’t the only one to meet a brutal and untimely end; there’ve been at least two other victims. Then Captain Blue Anderson starts making ghostly appearances, and the FBI’s paranormal investigation unit, the Krewe of Hunters, sends in Agent Malachi Gordon.

Abby and Malachi have a similar ability to connect with the dead and a similar stubbornness. Sparks immediately begin to fly; sparks of attraction and discord. But as the death toll rises, they have to trust each other or they, too, might find themselves among the dead haunting old Savannah!

I like Heather Graham. I enjoy her quirky female leads and how she smoothly integrates her paranormal characters in to her mysteries. But, I will not be reading any more of her Krewe of Hunters books. The Night is Alive is the second Krewe of Hunters novel reviewed on Sand Between the Pages.  You can check out Phantom Evil here.

Let me start with the positive points. The Night is Alive delivered on Savannah history. The detailed passages of the city streets, the historic buildings, and underground tunnels had me ready to book a vacation. I had no problem feeling like I was exploring alongside Malachi and Abby. Graham also didn’t disappoint when it came to pirate lore. My husband and I are both big fans of pirate history and Blue’s scenes were definitely my favorite.

Now on to why I will not be reading any more Krewe of Hunters novels. I do not like the Krewe characters.  They are undeveloped, leaving them to read very two dimensional and forced.  I can’t get invested in their stories.  Abby is a new FBI agent driven to prove herself and we are constantly reminded of this fact by EVERYONE in the story.  She never actually acted like a trained FBI agent until she faced off with the killer so we definitely needed all those reminders, but it gets old fast.  Her relationship with Malachi didn’t feel remotely realistic.  They went from hating each other, to hooking up, to maybe dating, and then to discussing marriage in the course of three weeks.  ARE YOU KIDDING ME!? This is the second time insta-love has been a major plot device in my Krewe of Hunters reading.  No, just no.  Don’t worry, I didn’t give away any spoilers.  You know where Abby and Malachi’s relationship is going the minute they meet.  Here are some actual spoilers though, so avert your eyes if you must!  I do not like what Graham did with her serial killer.  She did everything she could to divert suspicion from this character so that the reveal would be all the more shocking.  No, it wasn’t shocking.  It was irritating and I was rightly pissed when I realized whodunit.  And then, THEN, she kills off the serial killer before explaining his motivations.  I know this happens in real life, but it just felt lazy coupled with the complete lack of character development throughout the entire story.  UHG!

Now don’t let this review deter you from Graham’s stand alone and Harrison Investigation novels.  I enjoy many of them and they are pretty well developed!  I just can’t get behind her Krewe of Hunters series.  Are you a Heather Graham fan?  What do you think of her new series?