Every Trick in the Book 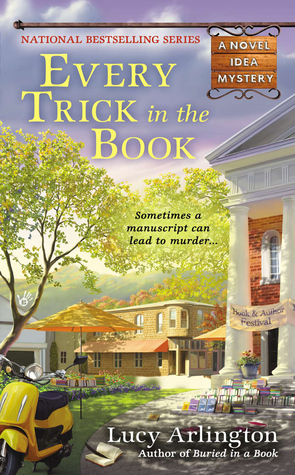 The national bestselling Novel Idea Mysteries return with Lila Wilkins, who has just been promoted to full-time literary agent. But great new writers aren’t the only people she’s trying to catch…

Lila Wilkins has it all: the home of her dreams in the charming town of Inspiration Valley, North Carolina; a perfect police officer boyfriend; and a new job she absolutely loves. At the Book and Author Festival, which is sponsored by the Novel Idea Literary Agency, Lila expects to discover some talented new authors, but what she finds instead is the body of an editor to whom she bears an eerie resemblance.

Trouble is, the editor’s death isn’t the only literary murder taking place. Soon a blossoming author is also killed, and Lila has a gut feeling that the two murders are linked. Now she must hunt down the dark figure who killed these women—and to her surprise, she just might find the clues hidden in a manuscript…

Every Trick in the Book is the second story in the Novel Idea Mystery series. I started last May with the first novel, Buried in a Book, and was pleased to jump start my May reading with book 2.

Lila has happily settled in to her new life as a literary agent at Novel Idea.  She has a budding relationship with cute cop Sean, a new dream house, and healthy relationships with both her mom and son.  Everything is going well until she discovers the body of a book editor during the costume party at the fall Book and Author Festival.  Soon the body count is racking up, and to make matters worse, her son is sure that something illegal is happening at the local co-op.

The best aspect of Every Trick in the Book is the setting. The detailed descriptions of crisp weather, colorful leaves, and fun Halloween decorations had me craving pumpkin spice cookies and a piping hot vanilla latte. Fall is my favorite season and the setting pulled me in to the story feet first.  Every Trick in the Book is filled with quirky, interesting characters and I enjoy reading the story from Lila’s point of view.  I have always wished to work in the literary/publishing industry and Lila has my dream position.  I highly doubt Every Trick in the Book provides a realistic portrayal of the industry but I am totally ok with that.  I like this version.  The Novel Idea Literary Agency setting is what keeps me coming back to this series.

Lila just left me frustrated though.  The mystery was cliché and not really a mystery, which honestly wasn’t disappointing for me because I wanted something light and cliché. I just wasn’t pleased with how Lila acted throughout the story. She consistently jumped to conclusions, despite Sean’s advice, and then became frantic each time she was wrong. She insisted on investigating but was constantly in over her head. I was left flabbergasted at her crazed belief that Kirk Mason was out to kill her and her flight through the Novel Idea offices.   It was hard to believe the same woman catches the fugitive co-op manager in the end. I was waiting for Lila to finally listen to the people who love her, Althea and Sean, but she really never got to that point.  I was also a tad surprised at the drastic change in the co-op.  It was good for a subplot but might have been more effective if the change occurred over a longer time period instead of the few short months indicated in the timeline.

A pet peeve of mine is proper law enforcement behavior in stories. I did not like that Sean’s immediate response when called out to a crime scene was to hold and kiss Lila before doing his job.  Lila, stop whining about how its hard to be in a relationship with a cop and instead stay out of trouble! I would be horrified if a killer got away because my man took the time to kiss me before arresting the suspect. In real life, Sean would look at Lila, visually make sure she was ok while running to secure the scene.  You can kiss once that killer is safety handcuffed in the backseat!

I still recommend Every Trick in the Book despite these few negative points.  I like the cast of characters and the setting.  It is a fun cozy mystery and it has me really looking forward to this October! Are you a fan of the Novel Idea mysteries?