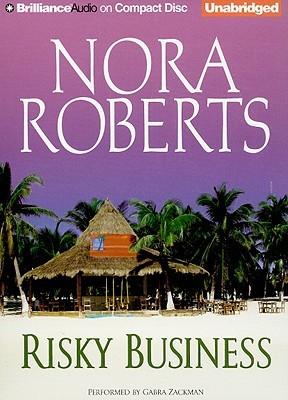 Liz Palmer runs a dive business in the quiet tranquility of a Caribbean island. Tranquil, that is, until a routine trip over the reef reveals the body of her newest employee – diver Jerry Sharpe. But when his brother, Jonas, shows up asking questions, Liz can’t see how she can help. She barely knew Jerry. Then someone breaks into Liz’s apartment, intent on her murder. Liz realizes that she is already more involved in Jonas’ quest to unravel Jerry’s murky past than she wanted to be. And now Jonas and Liz will be drawn into a dangerous criminal underworld that could cost them both their lives…

I decided to read Risky Business because I was drawn in by the promise of SCUBA diving and a grisly murder mystery. I can’t say no to a goodmurder mystery and Liz, the leading lady, actually finds her missing dive master by seeing his body through the bottom of her glass bottom boat. I was hooked with that scene! What can I say? I guess I’m morbid.

Unfortunitely, that is where my enjoyment of the story also died a grisly death. I’m still going to start with the few positive notes. I loved the mystery of Risky Business. The drug smuggling storyline was interesting and I was kept guessing throughout the story. I also enjoyed the SCUBA diving scenes. Cozumel Mexico is one of my favorite dive sites and these passages brought back some wonderful memories of crystal clear waters and vibrant sea life. It had me ready to jump on a plane and head out on a dive trip.

That’s it though. I’m sad to say that finishing this book was akin to pulling teeth thanks to the romantic relationship between Liz and Jonas. It. was. so. annoying. To sum it up: Liz is damaged and stubbornly refuses to allow herself to be happy. Jonas is spoiled and pushy and goes way out of line to seduce Liz (like going to Texas to secretly meet her daughter). Liz gets mad. Jonas gets mad. But they are sooooo in love with each other. Major eyeroll and gag me moments. Every moment just seemed so forced.

I realized, half way through the book, that Risky Business was originally published in the 1980s. This could explain why the romance is so forced, but still…nope. The majority of the book was dedicated to this romance and the mystery was just a side note instead of a major plot line. Risky Business just wasn’t my type of mystery.

What do you think about romance in your mysteries? I prefer it to stay a subplot. What is your favorite Nora Roberts novel?