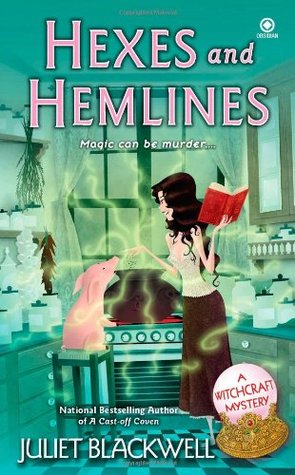 With her vintage clothing store taking off, Lily Ivory is finding that life in San Francisco suits her just fine. But her ability to sense vibrations from the past, so useful in locating secondhand gems, has landed her in the middle of a new mystery…

Lily gets called away from Aunt Cora’s Closet when the police need a witch’s take on a strange case. Malachi Zazi was stabbed to death in his apartment, under a ladder, surrounded by the number thirteen, a broken mirror, and a black cat—superstitions that the victim, as head of a rationalist society, was devoted to discrediting.

When the police identify a suspect from the Serpentarian Society, Lily is shocked to learn it’s someone she knows. But with bad luck plaguing all its members, she begins to wonder if there’s more at work than mere coincidence. And while there aren’t many clues from the crime scene, Lily finds evidence of dark witchcraft and a hex on her friend’s doorstep. With her friend’s safety at stake, Lily is determined to use magic to find the murderer before everyone’s luck runs out…

Hexes and Hemlines is the third book in Blackwell’s Witchcraft Mystery series. This novel finds Lily consulting on a murder investigation that involves bad luck charms and a witchy cleansing.

Hexes and Hemlines is my least favorite of the series so far, but I still enjoy it for a number of reasons. Namely, Lily finally gets a backbone when it comes to Max and Aidan. She walks out on Aidan when he demands, without explanation, that she stop investigating Malachi Zazi’s murder. FINALLY! We also see Lily develop healthier friendships with both Inspector Carlos and Sailor the psychic. Both, in their own odd ways, allow Lily the chance to be herself. Carlos helps build her confidence by asking for her help and taking her advice. Sailor just accepts Lily as the sweet nosey witch we all love. Sailor is my favorite part of Hexes and Hemlines. Yes he may be working for Aidan but he can’t help liking Lily. We get to learn more of his backstory and see him grudgingly turn in to Lily’s friend.

The convoluted and just odd storyline is the main reason Hexes and Hemlines is my least favorite of the first three books. The story is rather complex and developed rather well but it’s almost too much for a cozy mystery. There were a few times where I found myself asking “wait…what?” Blackwell did a good job tying everything together but the short mystery platform left her revelations feeling abrupt. It is also much darker than the last two books which can be off putting. Just remember these points when reading Hexes and Hemlines and you won’t be thrown off as I was.

I’m going to refrain from whining about Max and Aidan because both have only become more annoying and controlling in book 3. The good thing is that Lily is FINALLY standing up for herself. She doesn’t let Aidan control her magic and she doesn’t let Max push her in to hiding her witchy side.

Pick up Hexes and Hemlines! You’ll enjoy the side story of Oscar and the black cat! Plus, the new stubborn Lily is just fun! What witchy books are you reading this week?