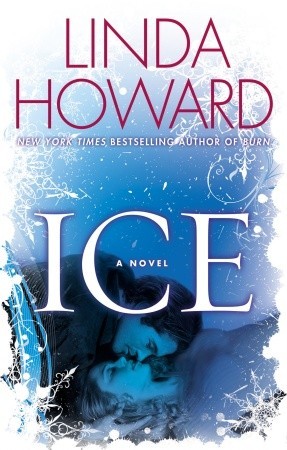 ’Tis the season for mistletoe and holly, Santa . . . and suspense. And the gift that keeps on giving is Ice: premier thriller author Linda Howard’s breathless tale of a man, a woman, and a battle for survival against an unforgiving winter–and an unrelenting killer. Oh what fun it is to read.

Gabriel McQueen has only just arrived home on holiday leave from the service when his county-sheriff father sends him back out again with new marching orders. A brewing ice storm, and a distant neighbor who’s fallen out of contact, have the local lawman concerned. So he enlists Gabriel to make the long haul to the middle of nowhere, and make sure Lolly Helton is safe and sound. It’s a trip the younger McQueen would rather not make given the bitter winter weather–and the icy conditions that have always existed between him and Lolly.

But there’s no talking back when your dad is the town’s top cop. And there’ s no turning back when night falls just as Gabriel arrives–and discovers that the weather outside isn’t the only thing that’s frightful. Spotting strangers in Lolly’ s home–one of them packing a weapon–is all it takes to kick Gabriel into combat mode. And his stealth training is all he needs to extract Lolly from the house without alerting her captors. But when the escape is discovered, the heat–and the hunt–are on. And the winter woods are nowhere to be once the ice storm touches down, dropping trees, blocking roads, and trapping the fleeing pair in the freezing dark.

So my books of choice the last few weeks have been arctic romantic thrillers….don’t ask me why. Just go with it!

Ice was the perfect book to get me fired up for winter weather. I listened to the audio book and the short gripping passages left transfixed during my drive and frustrated upon parking.

The main characters, Gabe and Lolly, aredecently  developed and relatable. Both must deal with their past and budding attraction for each other while also attempting to survive the icy Maine wilderness.  I enjoyed reading Lolly’s introspection about her personal growth since childhood and I loved that they stuck battling both the elements and two drug addicts. I like that Howard had the bad guys be simple meth addicts. I feel that too often these type of stories try too hard to make the villain over the top, like a professional thief, spy, or professional killer. I am pleased Howard opted for a couple that are too high on drugs to feel pain and too greedy to care about survival. She perfectly captured the frantic thinking of their drug addled minds, the intense self obsession of the addict, and their insane ability to survive the elements thanks to the drugs.

Lily and Gabe’s struggle to survive the ice storm is intense and its good Lolly isn’t an outdoors and survival guru. This makes her character even more relatable for the majority of readers.

Their relationship was a little awkward, which makes sense in this situation but I felt that Howard was trying to keep it steamy while the characters are fighting for their lives against drug addicts and the weather. It’s good they don’t have instant love and romance, but it still felt a tad awkward at times. Ice is a tad repetitive as well, especially during Lolly’s moments of introspection. Yes, I know that our minds tend to be repetitive when we are focused on our insecurities and future, but it was a little too much for my liking.

Ice was a great book to read during my work commute! I enjoyed the short survival thriller and recommend the book if you enjoy the genre. You’ll definitely enjoy the frantic escape attempts through icy Maine. Happy New Year’s Eve!