Revenge of the Wrought-Iron Flamingos 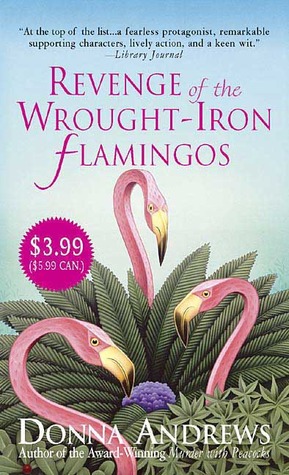 Every year, Yorktown, Virginia, relives its role in the Revolutionary War by celebrating the anniversary of the British surrender in 1781. This year, plans include a re-enactment of the original battle and a colonial craft fair. Meg Langslow has returned to her home town for the festivities–and to sell her wrought-iron works of art. Except, of course, for the pink-painted flamingos she reluctantly made for her mother’s best friend–she’s hoping to deliver them secretly, so she won’t get a reputation as “the blacksmith who makes those cute wrought-iron flamingos.”

Besides, she has taken on another responsibility–making sure none of her fellow crafters ruin the historical authenticity of the fair with forbidden modern devices–like wrist watches, calculators, or cell phones. She’s only doing it to keep peace with the mother of the man she loves. And Michael himself will don the white-and-gold uniform of a French officer for the re-enactment–what actor could resist a role like that?

Meg’s also trying to keep her father from scaring too many tourists with his impersonation of an 18th century physician. And to prevent a snooping reporter from publishing any stories about local scandals. Not to mention saving her naive brother, Rob, from the clutches of a con man who might steal the computer game he has invented. It’s a tough job–at least, until the swindler is found dead, slain in Meg’s booth with one of her own wrought-iron creations.

Now Meg must add another item to her already lengthy to do list: “Don’t forget to solve the murder!”

Fortunately, the more trouble Meg faces, the more fun the reader will have–and Meg faces plenty of trouble in this lighthearted and funny novel.

Revenge of the Wrought-Iron Flamingos is the third book in the Meg Langslow’s mystery series by Donna Andrews. This installment has Meg and Michael participating in the local history fair and reenactment. I am a history nerd and this is definitely the main reason why I enjoy this story. I am fascinated with reenactments and the details about the period costumes were enthralling. Plus, I’m a sucker for a good battle!

The body of a disliked man is discovered in Meg’s metallurgy booth with a knife in his back. He was a well-known scam artist who had his sights set on Rob’s new video game, so Meg is determined to protect Rob and keep him from trouble with the local law. Of course, hilarity ensues. Meg’s Dad is determined to be a murder suspect, the cannons sound through the night, and Meg is stuck keeping the peace between her fellow artisans and Michael’s mother, the tyrant in charge of the event.

I love the characters, the quick pace of the story, and the ‘ah ha!’ reveal at the end of the book. Donna Andrews is my favorite cozy mystery writer. Her stories always make me laugh and are my go-to when I’ve had a rough week. I continue to read them over and over; they are perfect for a trip to the beach! But, Revenge of the Wrought-Iron Flamingos offers more than a fun mystery and good laugh. This novel provides more character development, especially in the relationship between Meg and Michael. We see more interaction between the two, learn more about the competition between the two mothers, and delve in to more of Dr. Langslow’s odd hobbies.

Once again this is a quirky cozy mystery. You’ll probably figure out who-dunnit well before the reveal. You will read about some outlandish highjinxs. Do not pick up Revenge of the Wrought-Iron Flamingos if you are in need of a serious sophisticated read., but DEFINITELY read it if you’re craving a bit of fun. I promise you will want Meg’s wrought-iron flamingos by the end of the story!