The Realms of the Gods 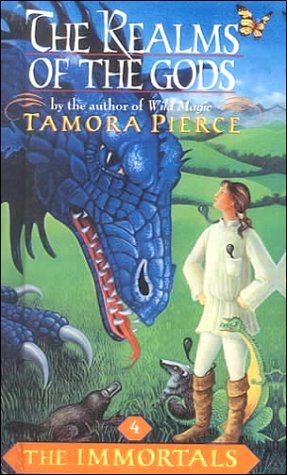 Daine and Numair are suddenly swept into the otherworldly home of the gods
after facing certain death on earth. But they cannot remain there for long,
because they are both needed to help fight the desparate battle raging in
Tortall. And so they undertake the dangerous journey back to earth…a journey
that will teach them a great deal about life and about each other, a journey
that will lead to the startling culmination of the conflicts, both mortal and
immortal, that have long plagued Tortall.

Big changes are coming to Sand Between the Pages in the next week so I thought it was the perfect time to review a couple of my favorites.

The Realms of the Gods is the fourth book in Tamora Pierce’s Immortals series. You can also check out my reviews of the first three novels: Wild Magic, Wolf-Speaker, and Emperor Mage.

Stormwing Ozone has declared war on Tortall, leaving Daine, Numair, and their allies on the defensive. Daine and her mentor are pulled in to the realms of the gods by Daine’s parents during a losing battle. It is here Daine learns the goddess of chaos is backing Ozone’s fight. The pair must make it across the realms of the gods to the dragonlands and gain passage back home if they have any hope of stopping this war.

Realms of the Gods is the exciting end of one of my all time favorite series! We are introduced to a new cast of characters (my favorite are the Darkings) and get to watch the development of old favorites. The settings are vibrant and colorfully written, and I like how we are just dropped with Diane in to this new world. And DRAGONS! The interactions with the adult dragons is the best but I won’t be sharing any more to avoid spoilers. As for the budding relationship between Daine and Numair….FINALLY! I shipped this before I even knew what a ship was. The two are perfect for each other and I love how Pierce gives them a very adult outlook on their future. This is rarely seen in young adult books, much less a book designed for preteens.

I have a slight complaint about the pacing. I feel like readers are rushed through the majority of the book because we practically jump from setting to setting during the journey to the dragonlands. And then the pacing comes to a screeching halt when we come to that final battle. I just felt the novel should have been longer to even out the pacing. The only weird thing is the age difference between Daine and Numair. She is supposed to be sixteen years old while he is in his mid-thirties. Normally, big age differences do not bother me but this series is aimed at preteens and that made it a little awkward. I’ve always felt that Daine should have been a few years older than she is, which would have made the age gap less drastic. Don’t get me wrong; I adore the relationship between Numair and Daine! The age difference just made it a tad awkward is all.

This is still a favorite series of mine, and I may end up rereading it, again, before the end of the year. I adore the world Pierce has built and I still connect with Daine years later. What is your favorite Tamora Pierce novel?