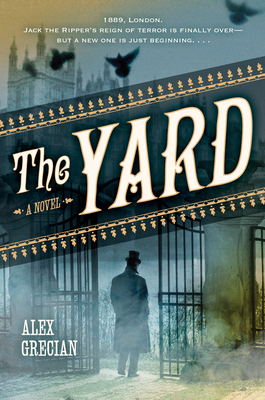 Victorian London is a cesspool of crime, and Scotland Yard has only twelve detectives—known as “The Murder Squad”—to investigate countless murders every month. Created after the Metropolitan Police’s spectacular failure to capture Jack the Ripper, The Murder Squad suffers rampant public contempt. They have failed their citizens. But no one can anticipate the brutal murder of one of their own . . . one of the twelve . . .When Walter Day, the squad’s newest hire, is assigned the case of the murdered detective, he finds a strange ally in the Yard’s first forensic pathologist, Dr. Bernard Kingsley. Together they track the killer, who clearly is not finished with The Murder Squad . . . but why?

Filled with fascinating period detail, and real historical figures, this spectacular debut in a new series showcases the depravity of late Victorian London, the advent of criminology, and introduces a stunning new cast of characters sure to appeal to fans of The Sherlockian and The Alienist.

Cover design is an important factor for me when picking out a book.  I am a visual person and will often times pluck a book off the shelf just because of the cover.  This was one of those times, and boy am I glad I did!  Alex Grecian’s The Yard provided the perfect gritty murder mystery that I have been craving the last few weeks.

So negatives first just to get them out of the way.  I was displeased with how shallow most of the female characters are, especially with how developed the main characters are for a first novel.  Fiona and the two prostitutes are the only females I found relatable; the rest were just there and it left all dialogue including these characters flat and confusing.   I am hoping there is more to the woman in the next installment.  Just remember that The Yard is a first novel, so there could be more showing language instead of telling language, but I am excited to see how Grecian evolves over time.

Ok, on to all of the positive notes!  The main characters are wonderful.  I fell ‘head over heels’ for all of them and found myself rooting out loud for each in their struggles.  Day, Kingsley, and Hammersmith are vivid individuals in my imagination and I actually did a ‘happy dance’ upon finishing the book last night!  I will the starting the next installment, The Black Country, as soon as I get my hands on it.

I am impressed at the complex writing style utilized by Grecian.  Readers will follow multiple plot lines while solving at least three mysteries. Grecian’s style can be rather choppy because he jumps between each mystery and includes three interludes in to each main character’s past.  I was not initially a fan of the writing style because its complexity may discourage many readers, but I now believe it is the best way to present the story.  I suggest devoting large periods of time to reading The Yard because you will not want to leave Victorian London!

The Murder Squad novels would be a perfect read in the fall if you are a ‘tone’ reader like me.  Fall’s cool weather and dreary rain showers will only to draw you more into the story!  I applaud Alex Grecian; he has managed to capture the nature of real investigation while maintaining an entertaining story.  I am almost sad that The Yard had to end!

Has anyone else picked up Alex Grecian’s novels?  If so, what do you think?