Death in a Deck Chair 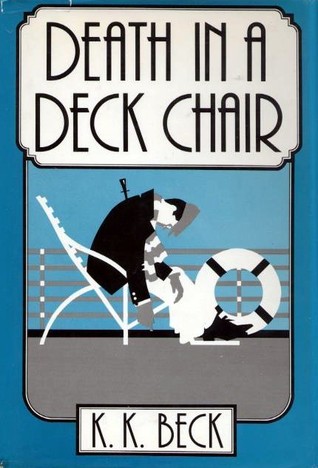 Young, innocent Iris Cooper, awarded a round-the world cruise by her doting and wealthy Aunt Hermione, is on the final lap of her voyage home . Her travels have prepared her for many of the types she meets on board: participants in a Balkan political intrigue, a vampy screen star, a muck-raking writer for a tattle-tale publication; a professor given to lecturing on the mind of the criminal lunatic; a prince who wants to be a jazz pianist. But she is not prepared for a murder. The captain recruits a reluctant Iris to take shorthand notes during the investigation, and soon Iris is on the trail of a dangerous murderer.

May found me struggling with a pretty epic book hangover after rereading my favorite mystery, Every Secret Thing. I’ll go into more detail about book hangovers later in the week, but I eventually found a cure while watching A Book Olive’s video, Spring 2017 Book Haul, Part 2: Fiction. (please check out her site as she is one of my favorite booktubers) Olive talked about picking up a few historical cozy mysteries by K.K. Beck and my interest was peeked. I started the first in the series, Death in a Deck Chair, on my Kindle that very night!

I am a fan of Beck’ Iris Cooper series. Death in a Deck Chair, finds 19 year old Iris returning to America via cruise ship after a around-the-world tour with her hilarious Aunt Hermione. I found Iris to be rather relatable and extremely likable; I enjoyed her intelligence, snarky whit, and unflapable curiosity. And I adore Aunt Hermione as well. I would have jumped at the chance of traveling the world with this woman and it’s obvious Iris inherited her spunk from her aunt. And don’t even get me started on Jack Clancy (you’ll hear more about him in the next few days!)

Each character was unique, with vibrant well developed personalities and each hiding their own secrets. It was easy to picture each of them sauntering along the upper ship decks by day and sneaking around the corridors by night. What’s even better is the lack of an insta-love story for Iris. Sure there is some flirting and the swapping of steamy kisses, but Iris doesn’t lose her cool over some good looking chap. She is there to find a killer!

My only negative point is that I wanted more. You will be able to read my review of the rest of the series, Murder in a Mummy Case and Peril Under the Palms, this week and my main complaint will be that I wanted just a little more from each story. I related with the characters and Beck provides decent descriptions, but I feel these stories would have better longevity just a few extra pages worth of detailed descriptions and enhanced development. The could just be a flection of the times as the book, though set in the 1920s-1930s, was written in the early 80s. *shrugs shoulder* Readers should also know thateven though I  didn’t figure out who-dunnit before the end, there were times where I easily guessed what would happen next. So, those wanting a novel that will keep them guessing at every turn should probably steer clear of this series.

Death in a Deck Chair is a great start to a fun cozy mystery series and the perfect read for a racing summer day. Go ahead and pick up all the books, cause you won’t be able to put them down once you join Iris in solving the mystery!

Are you a fan of K.K. Beck? Have you read any of the Iris Cooper stories? Let me know what you think!

One thought on “Death in a Deck Chair”