Walden on Wheels: On the Open Road From Debt to Freedom 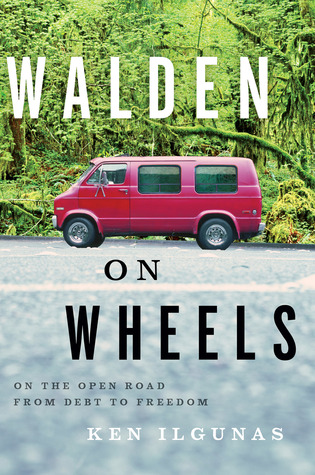 In this memoir, Ken Ilgunas lays bare the existential terror of graduating from the University of Buffalo with $32,000 of student debt. Ilgunas set himself an ambitious mission: get out of debt as quickly as possible. Inspired by the frugality and philosophy of Henry David Thoreau, Ilgunas undertook a 3-year transcontinental journey, working in Alaska as a tour guide, garbage picker, and night cook to pay off his student loans before hitchhiking home to New York.

Debt-free, Ilgunas then enrolled in a master’s program at Duke University, determined not to borrow against his future again. He used the last of his savings to buy himself a used Econoline van and outfitted it as his new dorm. The van, stationed in a campus parking lot, would be more than an adventure—it would be his very own Walden on Wheels.

Freezing winters, near-discovery by campus police, and the constant challenge of living in a confined space would test Ilgunas’s limits and resolve in the two years that followed. What had begun as a simple mission would become an enlightening and life-changing social experiment.

I discovered Walden on Wheels by complete accident. It just flashed up on my Amazon when I was looking for something else. Honestly, I kinda felt it was a sign screaming ‘READ THIS BOOK NOW!’ Especially, when I realized the book was partially about getting out of school debt. I was definitely hooked when I learned the author managed to get through grad school debt free! I had to read it. (Side Note: I’m up to my eyeballs in student loan debt thanks to a Bachelors and Masters degree…neither of which I actually use at my job)

I have mixed feelings about Walden on Wheels. I’m going to do something different and start with my negative thoughts. (Stick with me folks cause I promise it ends on a happy note) First, Ilgunas and I have different political views. Now, I can totally respect that difference but there were a few times the overly idealized, judgy, and often conflicting comments by the author were a tad irritating. Nothing that made me want to throw the book down in anger, but elicited frustrated eyerolls at certain passages.

One of my biggest complaints with autobiographies is that they are rarely objective. They can’t be. And the majority of negative reviews of Walden on Wheels concerns the author’s opinions on the people around him: the drunks of Alaska, the uneducated fornicators of Alabama, his burned out wage slave parents, the mindless drones at school. At times his passages are exhaustingly judgmental. It seems like the author only focuses on the negative. Until, you realize he isn’t. That he make himself focus on the positive aspects of each person. Then you realize the author’s harsh focus on negative personality traits is a projection of the feared deficit of his own personality

I enjoyed the book. I felt Ilgunas was able to look at his journey in a constructive manner and focus on bettering himself. I found his accomplishments impressive!Ssure he may have used a jobless guy living in his van who dumps is piss bucket at stoplights as a roll model (seriously!?) but Ilgunas rose above continuing to work, feeding himself, and finding jobs where he could help people. Walden on Wheels is a story of a man coming to age. A kid watching the world around him, terrified of being trapped in a soul sucking existence with no adventure. And that is something in which I can relate.

I will admit to struggling through a couple of days of depression while reading Walden on Wheels. Why am I working a job just to pay bills? Why, oh why, did I take out all those student loans? Where can I buy a van? See, my husband and I have discussed the possibility of van camping a number of times, and I was ready for us to cash out and just go. But after multiple cups of coffee, and a reevaluation of my goals, I decided that I’m right were I need to be at the moment. Instead of quitting my job and hitting the road, I decided that it was time to just be better with my money. To count pennies as Ilgunas had. And I decided to focus on my hobbies, whether it be flying, hiking, or just reading a good book curled up on the couch. It was time I took more joy from the things that make me truly happy. It was time to go outside and reconnect with nature.

Give Walden on Wheels a read. It will make you think about your own life. No matter your political views or socio-economic opinions, personal evaluation is usually a good thing. And it will make you laugh!

I hope you’re enjoying your holiday reading. Let me know if you’ve read Walden on Wheels, or any of Ilgunas’ other work.