The Twelve Gauge of Christmas 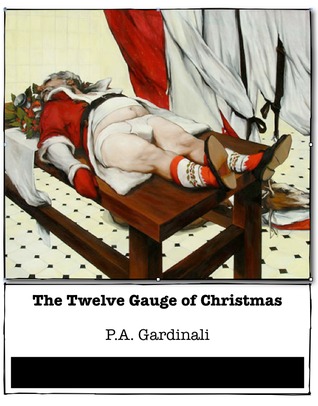 It was the old bastard, all right; laying by the fireplace, contorted in an unnatural pose. The streaks of blood ran down from the mantelpiece, which he had likely grabbed in a desperate escape attempt.” A homage to my favorite noir writer of all times. Set in an alternate reality, just slightly less bizarre than ours.

Note:  This story takes a rather morbid approach to the Santa Claus myth.  I enjoyed it because, well, I have a rather morbid sense of humor.  Just keep that in mind during my review and while reading the story.  I definitely recommend it; especially to the crime noir fans!

To be honest, I purchased The Twelve Gauge of Christmas because the Nook copy was cheap and the title made me chuckle.  It was such a far cry from the Hallmark movies I have binged watched the last few weeks and, oddly, exactly what I needed this Monday morning.

Gardinali provides a the very different approach to Santa Claus with his crime noir short.  You should all know by now that I am a sucker for the hardboiled crime writing style and Gardinali’s prose had me hooked the first page.  I even enjoy the gritty run down cop, Thompson’s, first person POV.  I want to tell you all about the little details that just rocked this story, but I can’t.  I want you to read it!  And I don’t want to ruin it!

I do wish Gardinali had provided more information about the religious division Thompson worked for.  The details concerning this version of our world had me hoping that Gardinali has more stories set in this alternate ‘US of A.’  I just want to know more, but it would have ruined the story structure if he had included it.  I also wondered if Gardinali was trying to make a subtle religious statement; if so, it escaped me.  Of course, this may just be me over analyzing in my lack-of-coffee state.

Have you read The Twelve Gauge of Christmas?  Are you a fan of Gardinali?  This story has me wanting to read some of his other work.  It was nice to read a twisted Christmas story 😀