Island of the Sequined Love Nun

Take a wonderfully crazed excursion into the demented heart of a tropical paradise—a world of cargo cults, cannibals, mad scientists, ninjas, and talking fruit bats. Our bumbling hero is Tucker Case, a hopeless geek trapped in a cool guy’s body, who makes a living as a pilot for the Mary Jean Cosmetics Corporation. But when he demolishes his boss’s pink plane during a drunken airborne liaison, Tuck must run for his life from Mary Jean’s goons. Now there’s only one employment opportunity left for him: piloting shady secret missions for an unscrupulous medical missionary and a sexy blond high priestess on the remotest of Micronesian hells. Here is a brazen, ingenious, irreverent, and wickedly funny novel from a modern master of the outrageous.

Here is the setting: I am standing in the airport waiting for my flight on a bleak January evening. The pit of my stomach aches with the unnecessary stress that always accompanies the holidays and, thankfully, the airport bar is open. I shoot a whiny text to my best friend expressing my despair of not having a funny tropical book to get me through family vacation. She’s a gem and readily suggests Island of the Sequined Love Nun. I curse spotty wifi and download the book (I didn’t even read the book blurb) while sitting at the airport bar waiting for a shot of tequila. Guys….it turned out to be the perfect read to pull me out of my grumpy slump!

I am not providing a summary; the one above is perfectly vague and tantalizing. We are just going to jump into the review. I loved it. I mean…WWII flight exploits, Cargo Cults, live nose art, and perfectly detailed flight scenes…is there any question why I enjoyed this story?

It helps Island of the Sequined Love Nun also provides a complex plot, well developed characters, and tons of laughs. First: the characters are well rounded with each having individual flaws, positive qualities, and obvious personal growth. (Well. Except for the villains; however, they are delightfully crappy). Second: the setting is so effortlessly perfect. One minute you’re reading about Tucker traipsing through the jungle and the next you can taste the island grog and feel a bead of sweet roll its way down your butt crack. Moore is a quirky master of his craft.

HOWEVER….this is definitely the type of book you have to be in a specific mood to read. That is really going to be the only negative comment I have about the story. I mean there is a talking fruit bat and a holy poker game. It’s hilarious; it’s wacky. I picked up Island of the Sequined Love Nun because I desperately needed an easy laugh and it immediately delivered. But, I didn’t finish the book in one reading. I put it down and read something else when I experienced a change in mood. I picked it back up when I was ready to laugh again. And I enjoyed it!

This is the story I would recommend for those needing a funny, laugh-out-loud read to start off a beach vacation. It helped me get through the stress of a family vacation and frustrating time at work. I turned that last page (figuratively since I read it on my Kindle) while at the beach enjoying the perfect Florida spring weather. It was equally enjoyable on a sunny beach and gloomy airport. So read it! 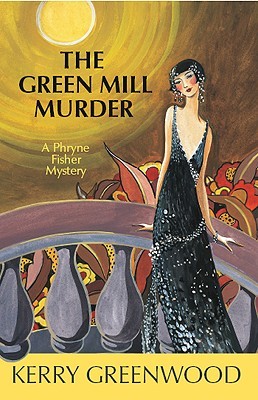 Phryne Fisher is doing one of her favorite things—cutting the rug at the Green Mill, Melbourne’s premier dance hall. In a sparkling lobelia-colored georgette dress, dancing to the stylings of Tintagel Stone’s Jazzmakers, nothing can flap the unflappable flapper. Nothing except death, that is.

The dance competition is trailing into its final hours when suddenly, in the middle of “Bye Bye Blackbird,” one of her fellow contestants slumps to the ground. No shot was heard, and Phryne, conscious of how narrowly the missile must have missed her own bared shoulder, undertakes to investigate. This leads her into the dark and smokey jazz clubs of Fitzroy, the arms of eloquent strangers, and finally into the the sky, on the trail of a complicated family tragedy of the Great War and the damaged men who served at Gallipoli. In the Australian Alps, she meets a hermit with a dog called Lucky and a wombat living under his bunk… and risks her life on the love between brothers.

November always finds me reading (and watching) historic mysteries. I don’t know what it is about this time of year that has me longing for quirky mysteries and spunky detectives, but you can bet my mystery TBR pile has grown in the last two weeks! One of my go-to gumshoes is Phryne Fisher. The tv show (available on Netflix) is fantastic, and the books are equally enjoyable. I have previously reviewed the first four books in the series, and it’s time to add the fifth story, The Green Mill Murder. Phryne hits the town determined to listen to jazz and dance the night away when a crooked man falls dead at her feet. Phryne finds herself on the hunt for a murderer, dealing with a number of unsavory folk, and flying over mountains in search of a lost soldier. I have an announcement for fans of the show. There is a Green Mill Murder episode, but it is a tad different than the novel. The murder is the same for both, as are the exquisite settings of both the jazz scene and the mountains of the Australian wilderness. But, the relationships between characters are drastically different, which is both good and bad. Let’s start with why I loved The Green Mill Murder, the flying. Greenwood expertly describes the sensation of flying in an open cockpit plane. The feel of ice on the wind, the overwhelming sense of utter freedom, and the smells of the engine fuel and oil had me wanting to put the book down and take off in my little plane. I could feel the tug of mud on wheels upon landing, and the encompassing fear of a sudden fog. Phryne’s flight, and subsequent time in the mountains, is what saved this book AND instilled it as my current favorite in the series.

Honestly, I wasn’t enjoying the story until Phryne took off in her little Gypsy Moth bi-plane. I felt the tv episode had done everything better. I preferred Charlie as a likable character instead of the cruel brat in the book. I felt the tv show actually handled the then illegal same sex relationship shared by Charlie and his lover instead of rushing through it, as in the book. And Phryne’s indifference and impatience through the first half of the novel matched my own feelings. I was worried about continuing the story, but then Phryne went flying!

But flying wasn’t the story’s only saving grace. The Green Mill Murder allows readers a deeper look into the thought processes of our strong willed detective. We see Phryne struggle to tolerate tedious people. We see her trying to mingle with the jazz musicians, only to remain an outsider. And we watch her learn to embrace her need for the lights and sounds of the city while hiding out in the quiet wilderness. It’s a stark look at an intelligent woman who struggles to fit in the world around her, and it was nice to see this side of Phryne.

The Green Mill Murder also provides a blunt examination of shell shock and PTSD. We hear stories shared by Bert and Cec, and watch as Phryne slowly uncovers the events that changed Vic’s world. It is an enlightening aspect of the story which left me feeling hopeful even after the last page was turned.

I recommend reading The Green Mill Murder and then watching the episode. I feel both were good in their own ways. Let me know which Mis Fisher story is your favorite. And i enjoy these cold winter nights with a good cup of coffee and a fun murder mystery!

Some of you cool kids may remember I am writing a helpful and humorous guide to surviving grad school. For those who didn’t know…now you do!

Each Monday I post a weekly survival tip on my site dedicated to my writing journey, LBoitnott. I want to make sure everyone has access to these tips so I’ll be sharing them here as well! Feel free to check out the first five and let me know what you think!

Best of luck on the new semester!

So, I know that 2015 has been around for almost two weeks but, I’ll be honest, the year just didn’t start with a good bang for me.  I was sick (still am) and I just couldn’t get positive about my coming year.  I could only focus on the negative; the towering amount of college debt that I have to start paying off and having to find a ‘big girl’ job so I can actually pay the bills.  I know; life could be much worse.  But it was still hard to swallow in my already whiny and sick state.  So, I waited to write this post and have forced myself to think positively the last 13 days.

Last year was pretty darn good.  I got to see my family and spend plenty of time at the beach.  I rediscovered my passion for both writing and reading.  I started Sand Between the Pages!  I FINALLY graduated from grad school; as did my best friend.  Plus, Mike and I bought our first house.  2014 was quite wonderful!  I am confident that 2015 will be even better.

2015 is going to be a year of change.  I finally have time to focus on my health and the weight has already started to fall off now that the holiday food is all gone.  I will be moving on to a new career.  Now idea what career that will be, which is both exciting and terrifying, but the time has come for me to discover something new.  I am going to continue reading.  I want to write more, and I have already made great progress on my current projects!  I turn 29 in just three short days…

I just plan to rediscover me.  More flying, diving, kayaking, and being outside.  Dedicating time to writing, reading, and enjoying my favorite TV shows.  More reviews and exciting updates for Sand Between the Pages!  And more lazy afternoons with a good book at the beach.  Yep, 2015 is going to be a good one!

I mean, what better way to read at the beach?!?!  What big plans do you have for this year?