The Dinosaur Hunter
by Homer Hickam 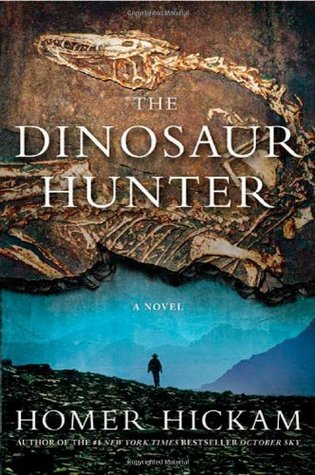 “A fascinating thriller, well crafted and relentless … A cross between Tony Hillerman and Larry McMurtry, this is one hell of a good read.”–Douglas Preston, author of Tyrannosaur Canyon and Blasphemy
The cowboys who work on the ranchlands of Montana expect more than their fair share of trouble. One of them is Mike Wire, a former homicide detective. Mike is about to learn murder and mayhem can happen under Motnana’s big skies, too. Beneath the earth lie enough dinosaur fossils to fill several museum collections—and make a fortune for whoever claims them first. Soon he will have to combine everything he learned as a cop with everything he knows as a cowboy to protect the people and the land he could never live without.

Ok, I decided to post a book that definitely fits the extra hot summer this year since I posted a book that made me think of fall earlier this week.  The Dinosaur Hunter documents a paleontological excavation on a Montana ranch in the middle of summer.  I initially grabbed The Dinosaur Hunter for a number of reasons: paleontology, Montana ranches, and a cop turned cowboy.  See, I grew up on a small ranch so I usually enjoy any story that spends a good amount of time describing wide open spaces.  Spaces that I miss terribly now that I am located in a neighborhood.  I also started my adult life with dreams of being an archaeologist, so the paleontology aspect of the book was interesting because I have always enjoyed digging in the dirt.  As for the cop turned cowboy…well that’s just personal preference!

The Dinosaur Hunter is the only Hickam novel I have read, but I was already a little biased by the time I started reading thanks to the October Sky movie.  This novel is slow.  And by slow I mean Hickam utilizes his two main male characters to ‘wax poetic’ about something every chapter.  “Oh, get on with it,” was uttered numerous times while driving around town with the audiobook.  I did not expect the book to be so long winded but that’s what happens when you see a movie first.  It definitely makes a good audiobook if you have a long stretch of road to travel.

Hickam presents characters that are definitely flawed.  The only character that I did not like was Dr. Pickford; there was nothing redeeming about this character.  He was boring, lazy, just painful to listen to, a liar, and participated in the most infuriating ‘hook up’ of the entire novel.  (I’m still a little peeved about him if you can’t tell)  I really liked Mike, but I spent most of the novel wishing he would be more assertive.  I expected him to have a stronger personality as a result of his law enforcement experience.  Nope, but I still connected with him and enjoyed his story.